The CASE credential tests the critical security skills and knowledge required throughout a typical software development life cycle (SDLC), focusing on the importance of the implementation of secure methodologies and practices in today’s insecure operating environment.

The CASE certified training program is developed concurrently to prepare software professionals with the necessary capabilities that are expected by employers and academia globally.It is designed to be a hands-on, comprehensive application security course that will help software professionals create secure applications.
The training program encompasses security activities involved in all phases of the Software Development Lifecycle (SDLC): planning, creating, testing, and deploying an application.

This makes CASE one of the most comprehensive certifications on the market today. It is desired by software application engineers, analysts, testers globally, and respected by hiring authorities.

The Purpose of CASE Is

For most organizations, software and applications determine their success. However, expedition, duplication, and penny-pinching often take centrestage with security consideration taking a backseat or is not present at all. An insecure or vulnerable application places these businesses at risk. Addressing security in each phase of the SDLC is the most effective way to create highly secure applications. Robust security-focused design principles followed by rigorous security-focused coding, testing, and deployment practices will lead to applications that can stand up to attacks. This will result in lower ownership costs for both, the end user and the application vendor.

What You Will Learn

Immediate Credibility: The CASE program affirms that you are indeed an expert in application security. It also demonstrates the skills that you possess for employers globally.

Pertinent Knowledge: Through the CASE certification and training program, you will be able to expand your application security knowledge.

Multifaceted Skills: CASE can be applied to a wide variety of platforms, such as, mobile applications, web applications, IoT devices, and many more.

A Holistic Outlook: Ranging from pre-deployment to post-deployment security techniques, covering every aspect of secure – software development life cycle, CASE arms you with the necessary skills to build a secure application.

Better Protect and Defend: By making an application more secure you are also helping defend both organizations and individuals globally. As a CASE, it is in your hands to protect and defend and ultimately help build a safer world.

The .Net framework has increased in popularity because of its open source nature, interoperability, language independence, library of codes and ease of deployment. It has become the preferred choice of application developers. However, there are not many training programs that address secure application development.

While .Net developers often learn security on the job, primarily because the basic education of programming does not usually cover or emphasize security concerns, the CASE program trains these developers to place importance on security.

According to the 2017 State of Software Security Report, nearly 90% of Java applications contain one or more vulnerable component/s, making them ideal breach points for hostile attackers.

Although Java has come a long way from its development in 1995, cyber crime has also spread, reaching epidemic levels, increasing the need for secure Java developers, regardless of whether they’re creating a new program or upgrading revising an old one.

– Web Attacks: The Biggest Threat to Your Network, Imperva

Certification:
The CASE exam can be challenged after attending the official CASE training. Candidates that successfully pass the exam will receive their CASE certificate and membership privileges. Members are expected to adhere to the policies of Cybertech Infosolutions’s Continuing Education Requirements.

CASE allows application developers and testers to demonstrate their mastery of the knowledge and skills required to handle common application security vulnerabilities.

To be eligible to apply to sit for the CASE Exam, the candidate must either:

Who Is It For?

iLearn (Self-Study)
This solution is an asynchronous, self-study environment which delivers Cybertech Infosolutions’s sought after IT Security training courses in a streaming video format.

iWeek (Live Online)
This solution is a live, online, instructor-led training course which means you can attend a course with a live instructor from anywhere with an internet connection.

Training Partner (In Person)
This solution offers “in-person” training so that you can get the benefit of collaborating with your peers and gaining real-world skills, conveniently located in your backyard. 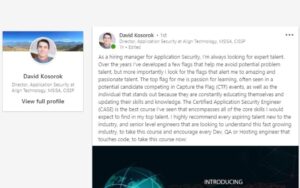 Available to US Residents Only.

The Best Path to Become an Application Security Engineer

Why Is Application Security Important?

Enroll now to get details on Plans & Pricing

Quick, punchy updates on Cyber trends, news and links to free resources. Only via Telegram and Signal. Join the groups now!